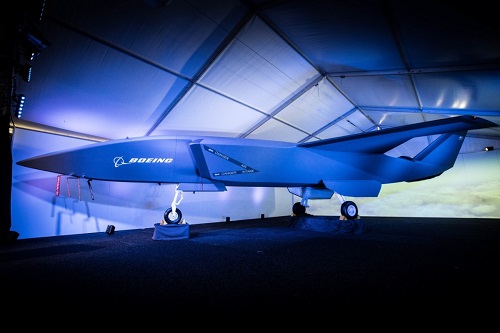 Boeing Australia has completed assembly of the fuselage structure of the first 'loyal wingman' unmanned aircraft it is developing in partnership with the Royal Australian Air Force (RAAF).

The Australian subsidiary of the larger Boeing company announced this milestone for the first of three prototypes for the Loyal Wingman - Advanced Development Program on 9 February.

"The Australian team has applied digital engineering and advanced composite materials to achieve cost and agility goals for the 11.7-metre aircraft, which is designed to use artificial intelligence in teaming with other manned and unmanned platforms," Boeing Australia said in a statement, adding that this is the first time that a military aircraft has been developed in Australia for more than 50 years.

The next major milestone will be weight on wheels, when the fuselage structure moves from the assembly jig to the aircraft's own landing gear to continue systems installation and functional testing. The aircraft is expected to complete its first flight this year.

As noted by the Boeing subsidiary, this first 'loyal wingman' prototype will provide key lessons towards production of the Airpower Teaming System (ATS), which Boeing Australia is developing for the global defence market.

When it was unveiled at the Avalon Air Show in 2019, the ATS concept was named Boeing ATS (BATS). The Australian Department of Defense (DoD) said it would invest AUD40 million (USD29 million at the time) in the development. Boeing said the system represents the company's largest investment in an unmanned aircraft programme outside the US but did not disclose the amount involved.

Unveiling a full-scale model of the system on 27 February 2019, the then-Australian defence minister Christopher Pyne said the programme had "enormous" export potential. Such a system in RAAF service would service as an unmanned wingman to manned aircraft types such as the Lockheed Martin F-35A Lightning II Joint Strike Fighter and Boeing F/A-18F Super Hornet.