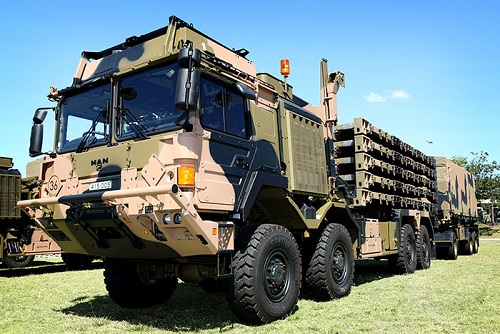 Minister for Defence, Senator the Hon Linda Reynolds CSC said this investment will realise the potential of our well-trained and highly capable soldiers.

“These new medium, heavy and semi-trailer vehicles replace a fleet that is more than 30 years old with a next-generation vehicle and specialist modules,” Minister Reynolds said.

“They will be used for a range of military deployments, from resupplying combat operations to supporting Defence’s assistance to Australian and regional communities after natural disasters.”

Already, the new fleet has provided enhanced support for a range of Defence operations in Australia, including the response to the Townsville floods and Defence’s ongoing contributions to Operation Bushfire Assist.

The fleet has also supported our Pacific neighbours, for both security operations and partnered exercises.

Minister for Defence Industry, the Hon Melissa Price MP, said the success of Project Overlander would not have been possible without partnering with Rheinmetall and Haulmark Trailers Australia, together with their extensive network of Australian industry partners including Varley in Newcastle, Holmwood Highgate in Brisbane and ECLIPS in Canberra.

“This project is an example of how our investment in defence industry is not only growing our sovereign capability, but is delivering jobs and opportunities for companies right across Australia,” Minister Price said.