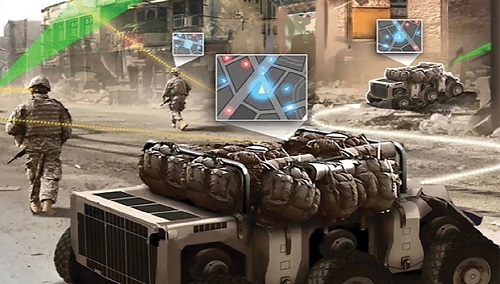 The US Army is picking up steam in its pursuit of robotic systems with a slew of platforms coming down the pipeline.

There are four capability sets where the Army is in need of assistance: lethality, stand-off, penetration and convergence, Wesley said during a keynote address at the National Defense Industrial Association’s Robotics Capabilities Conference and Exhibition in Columbus, Georgia.

Lethality and stand-off capabilities both relate to the problems associated with putting soldiers within range of enemy forces while attempting to maintain control of key terrain, Wesley noted.

“Lethality and stand-off creates a need to close the gap, and that’s where robotics would be prevalent,” he said. Unmanned systems can give the Army the ability to keep troops out of harm’s way, while still maintaining the firepower necessary to hold adversaries at bay, he noted.

Going forward, robots must employ artificial intelligence and machine learning to make decisions faster and more efficiently while on the battlefield, Wesley said.
The Army’s pursuit of a new robotic combat vehicle is just one example of the service’s efforts to leverage unmanned systems.

The Army’s next-generation combat vehicle initiative is the service’s effort to develop a new set of combat vehicles that will replace the service’s current fleet. As part of the Army’s plan to modernize the force, the cross-functional team was set up to pursue the technology.

The service is aiming to develop the vehicles in light, medium and heavy variants, Sponsler said.

The RCV-Light will weigh approximately seven tons and include a sensor bundle that will allow the platform to deliver lethal fires, he said.

“The RCV-L will support modular mission payloads and enable commanders to tailor the vehicle’s capabilities to each particular mission,” the Army wrote in a FedBizOpps posting in May. The Army was slated to request white papers for the RCV-Light in June with a request for proposals to follow, according to the notice. In the second stage, the Army will request prototype proposals for the RCV-Light and plans to award two other transaction authority (OTA)agreements.

The RCV-Medium will weigh about 10 tons and be equipped with a medium-caliber weapon cannon and an anti-tank guided missile, Sponsler said.

The vehicle must be able to carry a payload of at least 5,400 pounds, be transportable on a C-130 H/J aircraft and be combat ready no more than 15 minutes after disembarking, according to the notice on FedBizOpps.

The Army planned to release a request for white papers for the vehicle at the end of June. In the second stage, the service can award up to two OTAs for the medium variant of the vehicle.

The RCV-Heavy will weigh about 20 tons with direct-fire lethal capabilities, Sponsler said.

The platform will function not necessarily as a replacement to the current manned armor platforms, but instead as a wingman concept that maintains direct-fire capability and the other survivability characteristics, he noted.

The directorate develops force capabilities out of Fort Benning, Georgia.

“Enforced modernization is the focus on our brigade combat teams — we are the force modernization proponent for them and for all our soldiers’ systems within those formations,” Sando said during a phone interview with journalists in June.

“The Army has developed our concept for operations in the future, which we call multi-domain operations,” he said. “That’s how we must fight — how we must compete short of conflict to impose our will on our enemies.”

Robotics will be crucial for multi-domain operations, Wesley said.

“The need to conduct multi-domain command and control across the services is going to be answered by the idea of artificial intelligence and machine learning,” Wesley said.

“The very first place we want to invest in artificial intelligence is not a robot that fights another robot,” he added. “It’s helping us make decisions faster in a more efficient and effective way.”

The directorate is focused on enabling success in a close fight, Sando noted. It is using robotics and autonomous systems to extend the area and time over which formations can be effective, he said.

“The notion of strategic, operational and tactical stand-off [which] Gen. Wesley describes certainly applies to us,” he added.

A major effort underway is the small multipurpose equipment transport, a robotic mule, which was originally known as the squad multipurpose equipment transport.
“The system itself decreases reliance on daily external sustainment, carrying up to a 1,000 pounds of supplies and equipment,” said Col. Tom Nelson, director for the Army’s robotics requirements division. “It can go 60 miles, over 72 hours and … can offload up to 3 kilowatts of power as it does so.”

The service originally intended to deploy the robotic mule to lower echelons in the service, such as squads or platoons. However, after testing the platform, officials decided the systems could burden them administratively, Nelson said.

“There are areas where soldiers can walk and crawl and climb that we just couldn’t put ... a vehicle of this size with them,” Sando said. “They can’t have [the system] all of the time, manage its movement from point A to point B, manage its maintenance and those other things.”

“That is more appropriate for a higher echelon,” he added.

As of now, the service is working toward using the system primarily as a battalion asset.

“We believe that it can best be supported now at the battalion level, so it is … a combat support system, but it’s employed at the company, platoon and squad level,” Nelson said.
The platform was demonstrated at Fort Benning in April and again in May at Texas A&M University.

“The operational tests demonstration really, really showed and demonstrated that the capability is ready,” Nelson said.

If approved, the small multipurpose equipment transport could begin fielding in fiscal year 2020, according to the Army.

Another ground system nearing fielding is the common robotic system individual. or CRS-I.

QinetiQ North America won the contract for the CRS–I program in March and was given a seven-year indefinite-delivery, indefinite-quantity contract valued up to $164.5 million.
The system is a remote-controlled ground robot that is backpack-portable and stocked with advanced sensors and mission modules for dismounted forces, the company said in a press release.

The next step in the CRS-I development is a limited user test scheduled for September, which will support full-rate production of the system in 2020, Nelson said.
The robot will initially be sent to explosive ordnance disposal units and infantry brigade combat teams, he added.

The former is a palm-sized rotary wing unmanned vehicle created by FLIR Systems.

“Ultimately the system enhances the survivability both in and out of enemy contact and then overall, reduces risks to soldiers in mission,” Nelson said.

The system was fielded in June.

The SRR is a small multi-rotor vertical takeoff and landing UAS that weighs approximately three pounds or less, Nelson said.

“It has got increased speed, range, endurance and sensor capability,” he noted. “It reduces exposure to potential threats, enhances freedom of maneuver and provides decision making down to the platoon level.”

The program executive office aviation is using streamlined acquisition authorities granted by Congress to speed up the onboarding of the short-range reconnaissance system.
It is expected to be fielded in April 2020.