Australia could purchase the in-development B-21 Raider 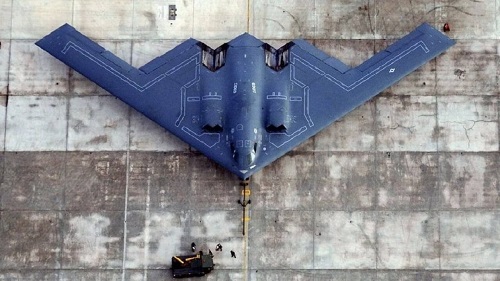 Defence Minister Richard Marles has given his strongest hint yet that Australia could purchase the in-development B-21 Raider.

In an interview with The Australian yesterday, he was reported to have said the next-generation stealth bomber was “being examined”.

It comes days after US Air Force Secretary Frank Kendall surprisingly said his country would be “willing to talk about anything that there was an interest in from the Australian perspective that we could help them with”.

The B-21 is the ‘sequel’ to the UFO-like B-2 Spirit, which can carry nuclear weapons and costs $2 billion each.

Introduced in the late Eighties, the batwing bomber is seen as the US’ most prestigious and prized aircraft, with only 20 in active service.

It come weeks after five of the originals arrived at Base Amberley for a month of training with RAAF F-35s, in what was certainly its biggest ever deployment to the region.

Marles also hailed the introduction of the F-35 to the RAAF’s fleet to replace its Classic Hornets, which were in service since 1985 and retired in late 2021.

He said the fighter had proved itself to be “indispensable” and “can just do things the Super Hornets can’t”.

“It is an utterly essential component to our air force and the potency of our defence force,” Marles added.

Thus far, the fighters have clocked in excess of 15,000 flight hours and have already achieved initial operational capability, making it combat-ready.

The aircraft comes in three variants: the F-35A — purchased by Australia — is a conventional take-off and landing (CTOL) version; the F-35B is a short take-off/vertical landing (STOVL) variant, and the final F-35C is the carrier type (CV).

Marles was speaking en route to visit the RAAF in the Northern Territory as they take part in exercise Pitch Black alongside 16 other nations.

The training program will be mostly based in Base Darwin and Base Tindal and is scheduled to last from 19 August until 8 September.

It comes ahead of the new federal government’s Defence Strategic Review, which will decide whether to expand the F-35 fleet to 100 and also examine whether Australia should replace its outgoing Taipans with Black Hawks.