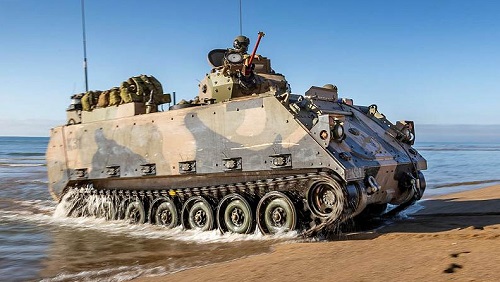 Concerns are growing inside the Australian Army that its most expensive procurement project in history, to replace 60-year-old armoured personnel carriers with new infantry fighting vehicles (IFVs), could be dramatically scaled back or even scrapped.

Under project LAND 400 Phase 3, Defence is evaluating rival Korean and German options to build up to 450 state-of-the-art IFVs, in a program worth $18-$27 billion.

Defence analyst and former army officer Leo Purdy warns the government must not wait for the strategic review findings before deciding on which option to replace Australia's Vietnam War-era M113 Armoured Personnel Carriers.

"If we don't upgrade the M113 and replace it with a newer system which is the infantry fighting vehicle — we're condemning the infantry to fighting potential wars in the 21st century with 20th-century capability," the retired lieutenant colonel told the ABC.

"The Combined Arms Fighting System that protects our soldiers today has at its core a 60-year-old Armoured Personnel Carrier," General Stuart told the Indian Ocean Defence & Security Conference in Perth.

Mr Purdy is urging the federal government to fully commit to the program of 450 vehicles, well before the Defence Strategic Review is completed in March 2023.

"Given the pressures that inflation has provided to the budget, they're not going to go away anytime soon, so the longer this decision is delayed, the potential for this program to cost more is there," he warned.

Army's concerns about the future of the IFVs have been heightened by several defence commentators who have questioned the need for the equipment, arguing the military should instead be focused on long-range missile strike capability.

Among those to recently criticise the massive LAND 400 Phase 3 project is former defence official Michael Shoebridge from the Australian Strategic Policy Institute.

"It's very hard to see anywhere in South-East Asia, or the South Pacific or even the wider Indo-Pacific (going from India to mainland China and Korea) where the Australian military needs to structure itself to do large-scale land battles," Mr Shoebridge said.

"The places where the ADF must fight is in our near region: when I look at that I don't see a requirement for the army to use its 75 Abrams tanks, its 200 combat reconnaissance vehicles, its 1,000 bushmasters, and its 1,000 Hawkeis and 450 infantry fighting vehicles".

Just before this year's election, the ABC revealed the government was considering dramatically scaling back the IFV project, with Korea's Hanwha company and Germany's Rheinmetall since asked to submit revised bids for 300 vehicles instead of 450.

A decision on LAND 400 Phase 3 was widely expected to be announced under the Morrison government last year but is now scheduled to be unveiled before Christmas.

In a statement, a Defence Department spokesperson told the ABC: "LAND 400 Phase 3 is pending a decision by government and is subject to a live tender process.

"A recommendation on the preferred LAND 400 Phase 3 tender remains on schedule to be considered by government this year."