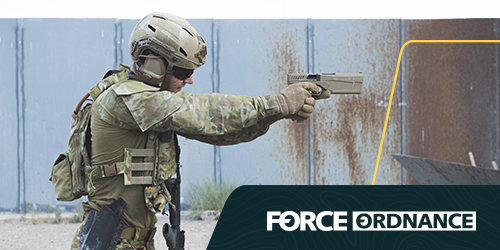 MAXIM 9 is a design innovation that will make history in the evolution of sidearms. As the world’s first off-the-shelf 9mm pistol with a built-in suppressor, it delivers multiple solutions for tactical operators: an integrally suppressed sidearm that’s easy to handle and holster, retains full firepower and even chambers standard ammunition.

Described as “a game changer” by the creator of the Australian Special Forces’ Extreme Close Shooting method, SGT (ret.) Paul Cale, the MAXIM 9 is built with capability in mind. It has multiple features designed to enhance the effectiveness and safety of operators, whether they be Special Forces, Police or close-protection agents. Several of these features, including the integrated suppressor, are industry-firsts.

With the MAXIM 9, its creator SilencerCo has made arguably the biggest advances in both pistol and suppressor technology ever seen. The Utah-based company has now brought its innovation to South Australia, entering a manufacturing partnership with Adelaide’s FORCE ORDNANCE that will see the revolutionary firearm produced Down Under.

MAXIM 9 provides an immediate solution for commanders looking to enhance the safety of their personnel. It not only protects against permanent hearing damage, but also the shock and temporary hearing loss that compromises situational awareness and physical function when under fire.

“Just the reduction of noise and recoil is a bonus,” says Cale, one of several ex-Commandos enlisted as an SME by manufacturer FORCE ORDNANCE. “It reduces the shock factor for those who may not fire their weapon often, or have never fired it at an enemy… For example, a police officer whose quiet beat suddenly becomes an active shooter’s playground.

“The sidearm is often the secondary or tertiary weapon, whether you’re a special operator reliant on a rifle, or a police officer whose first choice is one of the less lethal weapons in their kit. Either way, you don’t have time to add a suppressor before use — you need to draw and fire in a heartbeat. The MAXIM 9 solves that problem.”

The MAXIM 9’s creators set out to overcome every problem that suppressors previously presented…and they succeeded. In the process, they also enhanced the sidearm’s ergonomics on multiple fronts.

Depending on its intended use and/or the operator’s preference, the MAXIM 9 can be configured in two different lengths, using a detachable expansion cell and tool provided at purchase. At full length (10.75 inches), the weapon delivers a hearing-safe report regardless of which type of 9mm ammunition is fired — including overpressure rounds, as may be preferred for some defensive applications. In its shorter configuration (9.54 inches), it meets hearing-safety requirements if used with subsonic ammunition. However, even with standard ammunition, the shorter MAXIM 9 is much safer for an operator’s ears than any other sidearm of comparable power.

Although its suppressor adds a touch extra weight (the weapon weighs 39 ounces at full length or 37 ounces when shortened), the MAXIM 9 is well balanced, with the suppressor encased in a light aluminium shell and its weight offset by the weight of the action. In its shorter configuration, it is also vastly more compact than any comparable pistol with a suppressor fitted.

There is no longer a need to choose between a sidearm that’s as short as possible but exposes users to deafening sound, and adding a suppressor, which compromises handling due to the excessive length and weight. The MAXIM 9 combines the best aspects of both options.

Fitting a traditional suppressor to a sidearm can obstruct a weapon’s target sight, the MAXIM 9 not only eliminates this issue, it comes factory standard with a reflex sight mounting point on the suppressor assembly. Sitting above the pistol’s unique fixed barrel, this provides a stable mounting point to maintain zero. The MAXIM 9 also achieves a longer sight radius by having the front sight at the end of the suppressor (rather than behind it, as with a traditional suppressor attachment). Its sight radius is 10 inches at full length, and 8.75 inches in the short configuration.

Another important feature of this sidearm — especially for those law-enforcement and security officers who rarely shoot under adrenal stress — is its flat-faced trigger. The design provides for easy finger positioning and enhanced control, enabling greater accuracy. In line with other modern pistols, it also uses a trigger-blade safety rather than a manual one; a potentially life-saving feature that reduces the delay between drawing and firing by several seconds.

The MAXIM 9 can even enhance accuracy by virtue of its fixed-barrel design. In most semi-automatic sidearms, the firing action sees the barrel move as the slide recoils, and this shifting can affect aim slightly from shot to shot. The MAXIM 9 instead combines a fixed barrel with a proprietary delayed-blowback action — and with no recoiling slide, there’s no change in its alignment and no effect on accuracy.

MAXIM 9’s unique barrel structure also simplifies the action of clearing the weapon — another win for both safety and operator capability.

“It’s easy to rack, easy to clear,” says Cale, who tested the new weapon in operational scenarios. “When you rack it, only the rear half of the slide moves, so for smaller female officers it’ll be much easier to operate than other firearms. The slide design also allows you to see inside the whole chamber — from left, right and above — so it’s simple to ensure the weapon is clear of ammunition.”

A problem with traditional sidearms is that the mechanisms used for dampening recoil often have the unwanted side effect of reducing the bullet’s velocity. Pistols commonly feature a ‘ported’ barrel, which allows the propellant gases to escape in the direction of the shooter, reducing kickback but also muzzle velocity.

This issue is nowhere to be seen in the MAXIM 9, which instead employs a series of baffles and expansion chambers in its integrated suppressor assembly. This allows the gases to expand, decelerate and cool, reducing both their volume and velocity as they exit the barrel without affecting the stopping power of the round.

SilencerCo’s clever design minimises the requirements for many holsters, depending on the weapon configuration, and its streamlined form enables comfortable carry on the hip, as well as a rapid draw.

Although dual-sided holsters are available for both configurations of the MAXIM 9, FORCE ORDNANCE is collaborating with an Australian ballistics manufacturer to design and produce a bespoke holster for the weapon, specifically for Defence and law-enforcement use in Australia.

To find out more about the future of small arms for defence, visit https://forceordnance.com/